Report of the Festival

This year, RE was invited to the 29th cultural youth festival organized by and for the youth of YDG. The festival took place between the Day of Remembrance of the struggle of the transgender community and the International Day Against Violence Against Women. The festival has caused commotion in recent years because of the progressive character; which provides an open space for new ideas to combat oppression and exploitation which is intrinsically linked to capitalism, patriarchy, imperialism, racism, and ableism.

During the festival there was a competition of cultural acts. These acts came in several forms including music, dance, rap and theatre plays.  This year Bandista and Belâgat were present. There was singing, dancing and political discussions. Children, elderly, women, men, LGBT people, disabled freedom fighters; all were actively involved in the festival. We all were one when we dance and sing revolutionary music together.

Three years ago, Ecem Soyluer, participated in the competition as a professional belly dancer. She joined again this year, and beautifully delivered an amazing revolutionary performance. Not many people know that belly dancing as an art form originated and is practiced by proletarian women in women spaces or on the streets in the Middle-East. Western Colonialism has commodified and eroticized this art form and has transformed this into an sexist caricature for men to enjoy, instead of an art form originating from autonomous women’s spaces, allowing women to express and thereby free themselves of the patriarchal chains. The mere practicing of this art is revolutionary since the Turkish fascists have shown they feel like they are under attack. The practicing of belly dancing is seen as a threatening provocation for them. This shows it is a real revolutionary act of resistance against the Turkish fascist-colonialist state ideology. Millions of people who have never heard of YDG have seen, shared and spoken about the performance on social and mainstream media. There has been tremendous solidarity coming from the LGBT community, but there have also been a lot of attacks coming from the ‘leftist’ community who found the performance to be inappropriate for a revolutionary festival that has pictures of martyrs in the background. This critique does not provide any constructive response with its baseless arguments, it merely aims to deconstruct and divide, and it has no use value. It criticizes revolutionary cultural performance, instead of being in solidarity with it. The fact that the Turkish fascists have responded with so much anger and contempt shows us that the opposite is true. It shows us that cultural identity, international and LGBT solidarity is impactful resistance. That is why Revolutionaire Eenheid is in solidarity with YDG and Ecem Soyluer. We are in solidarity with this progressive act of resistance that highlights the struggle of women and the LGBT community who strive to freely express themselves.

In one of the theatre plays, two men openly expressed their love for each other and kissed. The normalizing of a society outside of the heteronormative one which we experience in bourgeois society is a form of cultural revolution in practice in the heart of imperialism. Despite the fact that this performance has caused commotion, there is not enough discussion on the autonomy of the body of a transgender woman, which shows the necessity of more education and solidarity work on the struggle of women, especially in times like these when fascism continues to grow and strengthen itself.

Revolutionaire Eenheid has been present at the festival, with books, t shirts and other creative expressions of a revolutionary culture. We have taken place in political discussions and made connections with other revolutionary organisations like Rote Hilfe, a leftist anti-fascist organization, made out of communists, anarchists and socialists who support activists in their fight against the state. 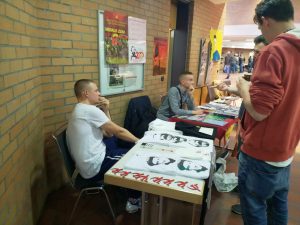 We invite all comrades to a Youth Camp organized by YDG. This youth camp will take place from the 21th to the 22th of December and will be held in Erbach, Germany. The costs of the food and residence are 32.50. Contact Vera for more information about the program and times. 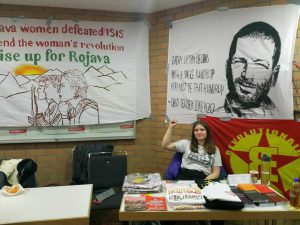 Break with the old world and build the new world free form oppression!

The board of RE