This article is a review of professor Jose Maria Sison’s book, On People’s War, presented at the book presentation on 27 March 2022.

The book On People’s War presents an overview of the Filipino people’s war, carried out by the New People’s Army under leadership of the Communist Party of the Philippines, with all of its victories and mistakes. Although the Filipino people’s war is geographically far away, through our Filipino comrades it is close with us in hearts and minds, as well as ideologically. That is to say; we wish our comrades to be successful in their struggle and also recognize that the peoples war provides important lessons to any revolutionary. Our Dutch comrades are anti-imperialist, anti-capitalist youth who want nothing more than to produce a meaningful movement of youth, students, oppressed people, that struggles against capitalism and imperialism here in the belly of the beast. We are young, but we want this movement to be carried over to the next generation and not to die out like others before us. That’s why in that regard the Filipino struggle for socialism, freedom and genuine democracy is one of the best teachers we have, since it is the longest continuing struggle worldwide.

From a humble lightly armed guerrilla force to a strong army

As the New People’s Army nears its 53rd anniversary, On Peoples War is launched as Sisons 7th book. The book details the struggle of the masses under the banner of the Communist Party of The Philippines, from its inception in 1969 as a humble, lightly armed guerrilla force with home-made firearms and indigenous weapons, until the strong army of the Filipino people that it is today, that crashes down on the reactionary enemy in the Filipino countryside. On Peoples War deals with the topic of semi feudalism and semi colonialism, the oppression of the poor peasants and the urban poor, the ever-deepening crisis and fascism. It details the strategy of winning popular support, building a broad mass base to wage national democratic revolution and forming red zones in which guerilla activity can thrive and confront reactionary power. 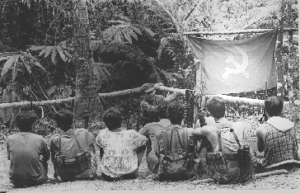 Although many topics and segments are interesting, there are two topics that are most relevant when studying the people’s war. The first is the relationship between people’s war and the mass base. On People’s War shows that 1/3 of the red fighters are waging battle and seeking engagements with the enemy, only those they are certain of winning, while 2/3 are working with the masses permanently.

The people’s war is in essence exactly what the word says that it is. There is no war without the support of the broad masses and there is no political power of the people without an army that fights for them. Like Mao said:

Without the people’s army the people have nothing.

Building democracy with the masses

Professor Sison’s book for us is very clear in forming an understanding that the people’s war is not just guns blazing and fighting in the mountains, small islands and jungle. It is also teaching the masses how to read and write, providing health care where ever necessary, redistributing food or fulfilling the peasants’ demand for land reform.

The people’s war is not an NGO or an institution that gives free hand outs to the masses, it is an organizer that builds democracy together with the masses. I read this as a crucial difference, instead of just handing things out, the people’s war, the mass organizations and the party together build confidence in the masses that society can indeed be changed. Instead of the false promises of puppets from Marcos to Arroyo to Duterte, the people’s war and its red fighters endure hardships and struggle voluntarily in service of the masses.

There are other lessons covered as well. On people’s war mentions how the mass base was almost entirely lost at one point due to a misguided line developing in the movement that claimed the time was ripe to go from the strategic defensive to the offensive. This led to an overstretching of forces and the deaths of many comrades. It required an entire rectification campaign to correct the error.

To conclude the point it must be stressed that this information contains valuable lessons. Experience of success are very useful of course, but experiences of mistakes ensure that other comrades will not make those same mistakes. Fall in a pit and gain your wit. The experience of building mass base contains lessons for activists in the Netherlands as well. We also try to organize the people in a way that is different from the revisionist leftist parties, NGO’s or government institutions. We take the lesson from the Philippines that we have to work together with the masses and build together instead of making grand but empty promises.

About the second point in On People’s War, the question of people’s war in imperialist countries, many lessons can be learned here as well. This topic is discussed in the final part of the book.

There are Maoists in the western hemisphere who hold the belief that protracted people’s war is a universal theory that can be applied anywhere in the world. This is a result of the Peruvian line which holds beliefs such as the militarization of the party. They hold that every party member has to be a guerilla fighter as well. The Maoists of this type have also initiated a debate with our Filipino comrades about this question.

This topic is covered very well in On People’s War through a number of articles and interviews, and the conclusion is: No. At this point people’s war is not a viable strategy in the imperialist core. It is in the imperialist core that the links of capitalism-imperialism are strongest. In the Filipino countryside those links are weak, and the contradictions between the outright poverty of the masses and the oppression of the comprador bourgeoisie and landlords are strongest. 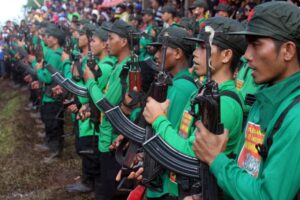 In the Netherlands, we as RE take the position that a large group of the population, the workers, have an economic interest in Imperialism. To illustrate this point we can look at how pension funds operate. Workers in the Netherlands pay a monthly sum that is pooled together and forms a massive amount of finance capital. This is in turn used to invest in precisely the same imperialism that compels the Filipino masses to struggle for socialism. It is used to invest in arms trade, child labor, exploitation of natural resources and cheap labor. The benefits are returned in the form of pensions that sustain Dutch workers at old age. Not to mention the many jobs in the core that depend on imperialist exploitation of the global south. Jobs in the harbor and transport sectors that disseminate goods produced under imperialism, jobs that oversee the exploitation in the global south for example. The simple reality is that to ask the masses to dedicate their lives to the struggle is not nothing, let alone armed struggle. Those that have a vested interest in imperialism will not risk everything they have and all the benefits this imperialist state provides for them.

That being said revolutionaries in imperialist core countries should not be Third-Worldists that sit idle out of a misguided belief that struggle in the west in completely useless.

First of all there are other groups that don’t have an interest in imperialism, such as undocumented migrants. There plenty of social issues such as racism, colonialism, patriarchy or the housing question that activists can and must organize around while utilizing the mass line. These lessons are covered in professor Sisons work as well.

Second of all we think it is clear that on a geopolitical level the world is increasingly shifting from a unipolar world into a multipolar world. US imperialism a faltering and with it, its stranglehold on many nations in the global south. The opportunities for people’s war there where it does not yet exist, or intensification of existing struggles are certain to increase. From the strategic defensive, to the equilibrium to the offensive.

It is quite clear that the task of revolutionaries in the global north is to build a movement that can provide meaningful solidarity to the people’s war in the global south. Revolutionaries in core countries can play their part in the normalization of the simple idea that brutal oppression warrants armed resistance. And such a movement has to be ready and built up when the inevitable moment arrives that the contradictions of capitalism-imperialism are great enough that revolution can be waged in the western hemisphere as well. That is also one of the reasons why the people’s war in the Philippines is so inspirational to our comrades. There is a struggle against brutal oppression, but no matter how many people are killed by the fascists, or people unjustly jailed, the fight continues and the masses do not give up. One day we will have to struggle as well, so we are grateful to take these lessons of those that are currently struggling on a higher level. We take these lessons, and in return we try to give something back.

In conclusion, for everyone reading this who maybe doesn’t know much about people’s war, this book has answers to questions such as: Why do ordinary people take up arms and risk their lives in battle? Why do people dedicate their entire lives to the struggle for freedom and socialism? Why is the people’s war supported by so many people that the mass organisations, party and guerrilla army manages to grow and even pass on to the next generation? These are questions we used to have as well, because there is no people’s war here in the strongest links of imperialism. In fact it is precisely the same imperialism that compels the masses to take up arms in The Philippines, India, Tamil Eelam, Palestine, Colombia and other countries, that produces a standard of living high enough for the majority of the people here to get on with their lives, without the need to struggle fierce and hard for change.

Besides answering such questions to readers, On People’s War serves multiple purposes. It is a great source of information about strategies and tactics in winning popular support for the struggle. The book is a fantastic debunk to fraudulent academics such as Alex de Jong and Joseph Scalice who seek to depict the Communist Party of the Philippines and New People’s Army as oppressors, terrorists and warlords, not to mention the reactionary propaganda from the fascist Filipino government. And finally there is no greater inspiration than the heroes from the Philippines to Palestine, the ordinary people, the masses, who show such courage and sacrifice when they pay the price of freedom with their own blood. They do so in service of the masses. On People’s War by professor Sison contains the story of their collective struggle for freedom, national democratic revolution and socialism.

On a final note we say as Revolutionaire Eenheid: Justice for Ka Oris, for all the martyrs and all the victims of the fascist Duterte puppet regime and the victims of red tagging. Freedom for all political prisoners.