The National Alliance of Urban Poor Filipinos, or KADAMAY, have been holding a protest camp as sanctuary for those under threat by the government and those fighting for housing rights.  Since January 23, they have been camped at the Commission for Human Rights.  We send our solidarity and strength to our friends and comrades in KADAMAY, on the frontlines against urban militarization and Duterte’s war on the poor!

February 8th marked a global day of action initiated by ILPS Commission 18 – for the rights of the homeless and internally displaced, read their statement below. 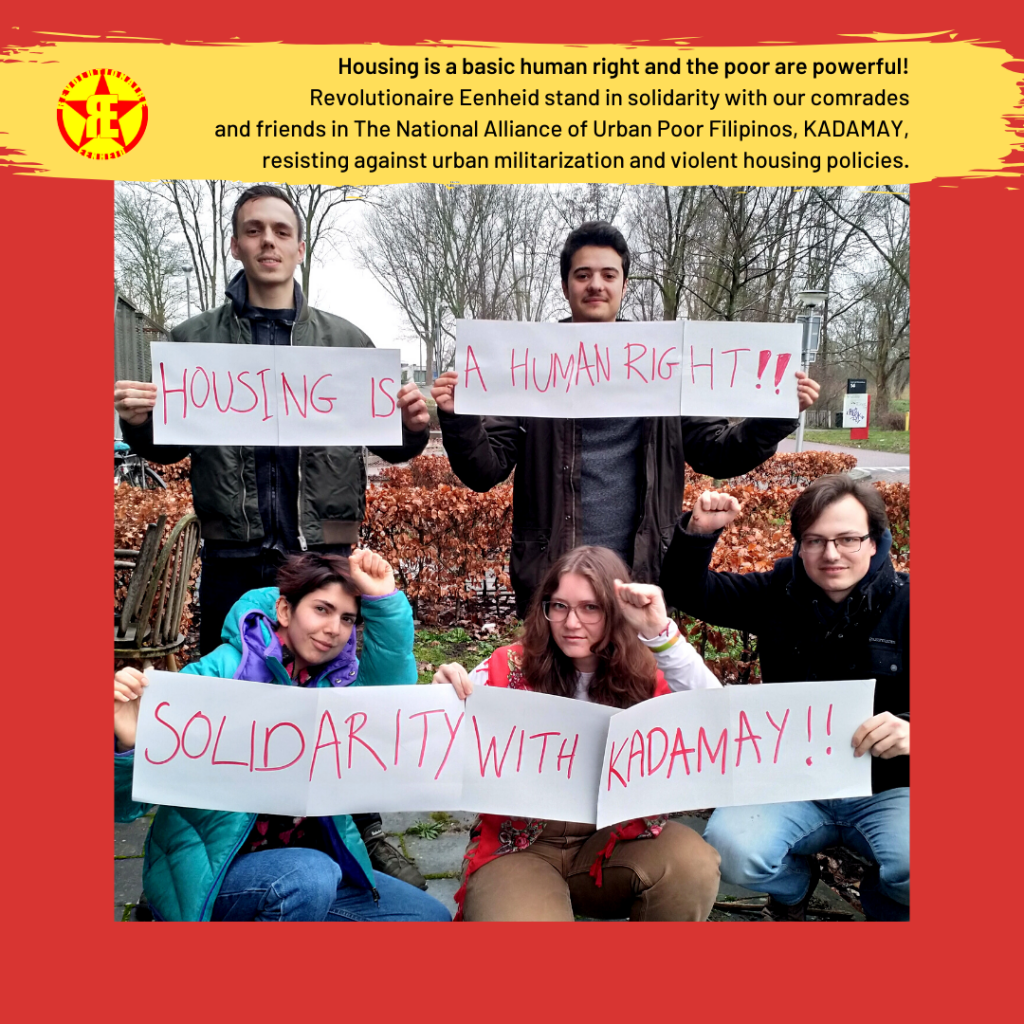 Housing rights defenders are under attack in the Philippines. Under the fascist regime of President Rodrigo Duterte, urban militarization has spread, community activists have been jailed on false charges, countless have been tagged as terrorists and experienced harassment and intimidation, leaders have faced assassination attempts and malicious lies have been spread about movements.

The National Alliance of Urban Poor Filipinos known as KADAMAY has felt the brunt of these incessant attacks. Since Duterte released his Executive Order No. 70 ordering the creation of a National Task Force to End the Local Communist Armed Conflict, urban poor and housing rights activists have been repeatedly targeted with the justification being that they are communist-terrorist groups. There is a clear intent to illegalize Kadamay.

This year marks the full blown implementation of Duterte’s flagship economic program, the Build Build Build, which draws in around half of its investments from Chinese loans to bankroll the eviction of more than half a million poor families. In its place are fake totems of modernization that will have rendered so many ordinary people homeless. Activists and housing rights defenders in particular are discredited, treated like criminals and silenced to ensure that the slew of projects are completed without any opposition.

February 8 marks a global day of action to support Kadamay and other housing rights activists amid an unprecedented level of attacks on civil liberties unseen since the Martial Law era of the Philippines in the 70s and 80s.

We will not be defeated by repressive curtailment meant to make way for imperialist backed projects.

Housing is a basic human right and the poor are powerful!

Stop the criminalization of activists!