On Thursday 30 May, Revolutionaire Eenheid organized a successful benefit evening for political prisoners at Dokhuis Galerie, Amsterdam. We cooked dinner, put together an exhibition of international political prisoners, and enjoyed the music of political duo, Your Local Pirates. Guests of the evening were Joke Kaviaar, who was imprisoned by the Dutch state for her political work and writings, and Mohammed Khatib from Samidoun, Palestinian prisoner solidarity network.

Joke Kaviaar is dedicated to the struggle for immigrant- and refugee rights. She was arrested and imprisoned in January 2019 after a legal struggle with the State since 2011. But being imprisoned did not stop Kaviaar from being active. She helped other prisoners file complaints, remained steadfast in the face of prison repression and kept writing and drawing.

Kaviaar also pointed out that even though we do not think of Dutch prisoners as ‘political,’ they sure are. Women who defended themselves against abusers. Refugees who are deported. Poor people who are forced into illegality. These are all political prisoners. 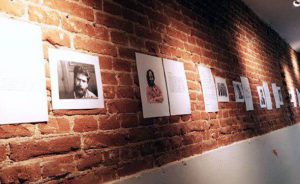 The situation is different in Palestine. Mohammed Khatib: “The occupation imprisons the organizers and leaders of the liberation movement. The Israeli’s think that by putting a struggler in jail they will become powerless. But today, political prisoners are leaders of our movement.”

Khatib emphasized that Palestinian prisoners are leaders because they are in daily confrontation with the occupation. In order to have a proper library, prisoners have organized collectively and for example went on hunger strike. Other struggles of prisoners are against administrative detention, for family visits and for access to healthcare.

In order to continue supporting Palestinian political prisoners, Samidoun is announcing its formation in the Netherlands. Samidoun Netherlands will focus on raising awareness about Palestinian prisoners and their struggle and organizing concrete solidarity with them.

The establishment of Samidoun Netherlands comes at a time of increasing repression of the Palestine solidarity movement. PayPal closed Samidoun’s account and the German parliament intents to outlaw BDS. Also in Germany, the state and Zionist forces have been trying to repress Rasmea Odeh, Palestinian freedom fighter. This bears resemblance to last year, when the Vrije Universiteit in Amsterdam evicted an autonomous student space after Revolutionaire Eenheid hosted Odeh.

We understand these desperate attempts as a desperate response to the growing strength of the Palestinian liberation movement. Samidoun Netherlands will strive for the liberation of all political prisoners by connecting the Palestinian prisoners’ struggle with European cases such as Joke Kaviaar and Georges Ibrahim Abdallah and broadening support networks across these causes.