Against the repression of Anakbayan – Filipino youth will not be silenced!

Home » Against the repression of Anakbayan – Filipino youth will not be silenced!

AGAINST THE REPRESSION OF ANAKBAYAN – THE YOUTH WILL NOT BE SILENCED! 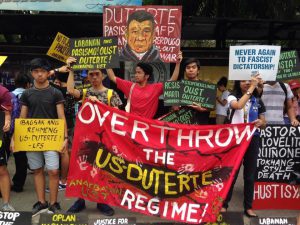 Revolutionaire Eenheid fully supports our friends of Anakbayan in times of increasing state repression. Recent days have seen the fascist Duterte regime step up its effort to smear Anakbayan by means of “red scare” tactics reminiscent of the Ferdinand Marcos era. However, like in the 1960’s and 70’s, the progressive youth of the Philippines will only grow stronger in times of repression and eventually win the battle for democracy.
As most Dutch people are well aware, the Filipino people are under attack by the Duterte regime. An estimated 25,000 people have been killed in the so-called “war on drugs,” which in reality consists of extrajudicial killings of the poor. Besides these well-known human rights abuses, the Duterte regime is systematically engaged in the violent oppression and exploitation of the Filipino people.

Martial law is set to be extended in Mindanao, with 10,000 internally displaced people in the region, martial law has only created more violence on the masses. Meanwhile, on the island of Negros, although martial law has not been implemented, it remains operational under Memorandum Order 32, issued in November. Since then there’s been a steady increase the number of those killed by state forces; police and state-backed paramilitary groups with a marked surge in the past four weeks, with civilian deaths reaching 87.  Many of those who have been killed were subject to “red-tagging”. This is all part of the counterinsurgency against the revolutionary movement in the Philippines.

Earlier this week, the latest in the red scare tactics took place in the Senate Committee Hearing on Un-Filipino Activities regarding “missing minors”. Here, the parents of members of Anakbayan took part in a frenzy of lies and misinformation in a media spectacle.  As Anakbayan stated on Thursday “There are no missing minors. All those purported to be “missing” are above the age of 18. Joining Anakbayan is a purely voluntary act of every single member, done of their own free will and volition. Every member is free to join and leave at any time.” Anakbayan is a force for progressive social change, organizing youth on issues of social justice in all sectors of society. It is because of the strength of the organization that they subject to constant attacks; red tagging and black propaganda against the organization and individual members.

As Duterte is setting himself up as the leader of a dictatorship, progressive forces in the Philippines continue their struggle for liberation from the clutches of imperialism. While the US and China are seen as the main dominant foreign influencers in the Philippines, the Netherlands has long been involved in the Philippines, going back to the East India trading company. Netherlands is the third biggest foreign investor in The Philippines, Dutch investment is also involved with the illegal OceanaGold mining project in Vizcaya where many environmental and human rights’ abuses have been recorded since the project began over 20 years ago.

As Dutch progressive youth, we express our full solidarity with the Filipino youth in general and Anakbayan in particular. We recognize their commitment to the struggle for just and lasting peace and real democracy in the Philippines. It is our duty as progressive youth all over the world to support each other and forward our join struggle.

Against the repression of Anakbayan!

Against Duterte’s militarization of the Philippines!

Down with US and Dutch imperialism in the Philippines!